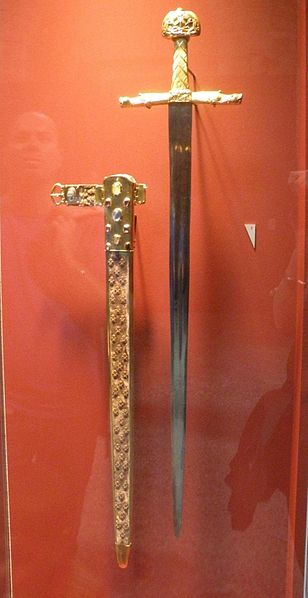 This sword is believed by some to be built from the original sword used by the late eighth/early ninth century king of the Francs, Charlemagne. Known as Joyeuse (meaning joyful), it was used in the Coronation processionals for French kings from 1270 (Philip III) - 1824 (Charles X).

Joyeuse was housed in the Saint Denis Basilica since at least 1505, before being moved to its current home, the Louvre in 1793. While it is generally agreed that the blade is medieval, its actual date is debated by historians. Some believe it to be ninth century and therefore possibly once owned by Charlemagne, while others date it to later centuries. Other parts of the sword are dated by the Louvre as;