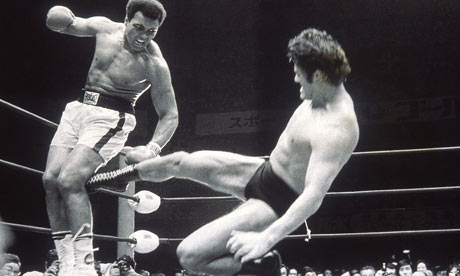 On June 26, 1976, Muhammad Ali engaged in a battle with Japanese professional wrestler Antonio Inoki in a fight that was billed as being a competition to find the toughest man on the planet. It is unclear whether or not the result was fixed beforehand, though both camps maintain that the fight was real.

Some sources say that Ali’s camp were expecting an exhibition match, but when they found out Inoki would be going at Ali to win, they demanded several rule changes. These included Ali being able to tag out of any hold by touching the ropes, the prohibition of kneeing and kicking by Inoki unless he was on the ground and anyone thrown or hit out of the ring would have 20 seconds to return.

As a result of the rule changes, the Japanese man employed the unusual tactic of spending most of the fight on the canvas, allowing him to kick at Ali when he liked. To counter this, the boxer mostly stayed out of range and spent much of the fight taunting his opponent, tell him to ‘fight like a man’ and throwing just six pinches for the entire fifteen round match. 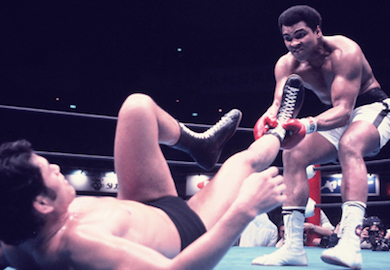 It ended in a draw but was such a farcical spectacle, the crowd threw garbage into the ring and chanted ‘money back, money back’. Despite this, Inoki fought in over 20 similar mixed style fights over the next 13 years and recently on twitter, Ali posted a picture of the fight and asked UFC President Dana White;

To which he replied;

"@MuhammadAli U sir are the original EVERYTHING! Ur the reason combat sports is where it is 2day
Greatest tweet ive ever recieved Im honoured". [Sic]