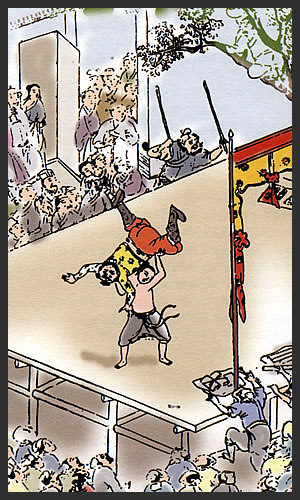 The lei tai is an elevated fighting arena without railings that dates back in its current form to the Song Dynasty (960 – 1279 CE) in Chinese history though older versions date back to the Qin Dynasty (221 - 206 BCE). Fighters would take part in matches that were presided over by a referee on the platform and judges on the sides in bouts that were fought bare knuckle or with deadly weapons. Some were to the death, though usually the winner would be determined when someone surrendered, was incapacitated or was thrown or removed from the stage. The victor would then be declared the ‘owner’ of the stage and would have to fight other challengers; the last man on the lei tai would be the champion.