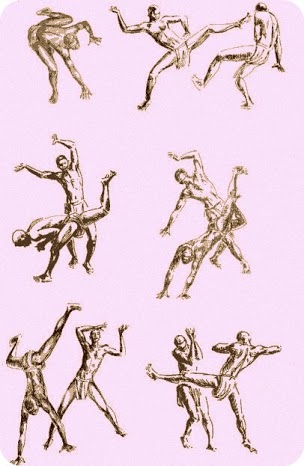 Engolo or NGolo (strength / power) is a ritualistic form of combat performed at various traditional ceremonies by several ethnic groups around the Cunene River in Southern Angola. Engolo consists of kicks, dodges, and leg sweeps, with particular emphasis on inverted positions, i.e. with one or more hands rooted to the ground. Many of the moves are reminiscent of capoeira fighting techniques and the African system may well have been one of the influences on the Brazilian martial art when it was first used by the slaves there in the 16th century.

It has been suggested that it is influenced by the way zebra fight each other and according to Dr TJ Desch Obi who has done extensive research on the history of fighting in this style, it has symbolic links to ancestor worship. He claims that the inverted positions help the men fighting connect both physically and spiritually with their ancestors generally, and with specific warriors from their family’s past.

Tags: africa  engolo  history of fighting  angola
« Back to posts