Mongols traditionally have their own technique for firing a bow known as the Mongolian Release, the Mongolian Draw or the Asiatic Grip.
Right handed archers hold the bow in their left hand and push it forward until the arm is fully extended while the right arm pulls the string back behind the ear.
Because of the power of the bow, they also use a special technique to hold the string.
Unlike the Mediterranean Draw predominantly use in the West which uses the first three fingers to draw the bow string, the Mongol archer pulls the string back with his thumb which is supported by the index finger curling around, placed atop the outermost joint, exactly at the base of the nail.
They also use a special thumb ring which is hooked on the string before release to protect the thumb from damage.
The ring can be made of various materials including jade, agate, leather, metal or bone.

Right up until the nineteenth century when effective breach-loading firearms became common, the composite bow used by Mongolian warriors was far superior to any long-range weapon used in the West.
The longbow was the most effective bow produced in Europe and used extensively during the Middle Ages.
However, the innovative design of the Mongolian bow made it lighter and smaller but with a longer range and greater accuracy.
While the longbow could shoot at distances of around 228 meters, the Mongol bow could hit a target around 320 meters away.

[The Mongolian] arms are bows and arrows, sword and mace; but above all the bow for they are capital archers, indeed the best that are known....They are excellent soldiers and passing valiant in battle.
They are also more capable of hardships than other nations; for many a time, if need be, they will go for a month without any supply of food, living only on the milk of their mares and on such game as their bows may win them....

The History of Mongolian Archery

Archery is so ancient and integral to Mongolian culture that there is debate amongst historians over which technological advance came first in the region, the bow and arrow or the wheel.
The Mongols lived a nomadic tribal lifestyle and relied on their considerable skill at archery not only for hunting, but also as their main weapon when fighting neighbouring tribes or when raiding  the rich lands of China, and when faced with the retaliatory expeditions that followed.

From the third century BCE sources tell of raids into China by a tribe called the Xiongnu, who predominantly fought with mounted archers. Their tactics must have impressed the Chinese as they adopted them and used them to pursue the Xiongnu across the Gobi.
So successful were these raids that in a bid to keep out the tribesmen of what is now Mongolia, previously build fortifications were connected making the beginnings of the Great Wall of China.  Despite this, raids and wars would be waged against China by the largely nomadic tribes using mounted archers on and off right up to the modern era.
Mongolian children were taught archery from a young age and the art was so ingrained in their culture, it was not only a weapon of war but also practiced as a sport with tournaments being held regularly in the nomadic camps and at the courts of the Khans.
The most important use for the bow on a day to day level was hunting and in this, the Mongol people also excelled. A source from China during the Tang Dynasty (c.618 -907 CE) stated; “Steppe inhabitants can hit at full tilt a running hare with a single arrow”.
Female members of the tribes were also prolific with the bow which they used for hunting and defending the tribe when the soldiers were away. In some cases women could themselves be part of the military, even fighting on the front line alongside their male counterparts.

Genghis Khan and the Mongolian Empire

Under the leadership of Genghis Khan and his descendants, archery was instrumental in building one of the larges empires the world has ever seen as they swept away most who faced them (with the notable exception of Japan). A story from a chronical known as the Blue Sutra from the Mongolian Yuan Dynasty (1271 - 1368) in China, demonstrates just how prolific the Mongol warriors were with a bow.
Genghis’s progress was barred one day by Magnagt, ruler of the Merkits, who stated;

Even though you are viewed as the son of the heavens, I am still not convinced about the abilities of your soldiers. If any one of them hits with a single arrow a small red flag from a distance of 100 num (one num equals the length of a bowstring, which is almost 1.5 metres), I will become your ally and friend – if not, we will be enemies.

On hearing Magnagt’s challenge Taitsuu, one of the Khan’s generals, laughed and stated; “You offer us the warrior’s standard exercise.” He then ordered one of his men, Chuu Mergen, to comply with the challenge who, according to the Blue Sutra, hardly needed to aim.
Another of the Mongol marksmen, Khavt Khasar, then stepped forward proclaiming; “It’s no challenge to hit a motionless target” then raised his bow and with a single arrow pierced the neck of a drake flying passed. As the slain bird hit the ground, he hit it with another arrow.
Needless to say that Magnagt was impressed by this, so much so that he not only let the Mongols pass without a fight but also enlisted nine thousand of his own men to Genghis’ cause.

Each warrior would carry two bows, one for long range shooting and one for fighting at close range. The bows were made from ten different materials included birch bark, fish glue, bamboo, deer antlers, natural silk threads and animal tendons, all of which could be found within Mongolia itself.
The design of the longer-range bow allowed them to fight at a distance while maintaining accuracy. This meant they could hit opposing forces with salvos of arrows while themselves being out of range, even against enemy militia on fortress walls.
Another tactic also often employed by the Mongols was to ride towards their enemies in continuous waves shooting volleys of arrows, often laced with poison, before retreating to get themselves out of range of their enemy’s arrows.
While shooting arrows on horseback, a Mongol archer would dramatically increase his accuracy by timing the release of the arrow to the moment when his horses’ hooves were all off the ground which would prevent the motion caused by them hitting the floor disrupting his aim.
They manufactured several different types of arrow, the composition of which depended on their purpose of use and would often carry two or more quivers with them into war or on hunting expeditions, with each quiver carrying different types of arrow.
The most powerful arrows were capable of piercing thick armour and their metal tips could measure 15 cm long and 3.5 cm wide. They also designed some intended for short range, long range, double tipped and arrows designed to be lit on fire.
Amongst their most inventive were whistling arrows, which had holes in the tips that made a whistling sound while in flight which would intimidate forces that faced them. They were also useful in hunting as the whistling sound of the arrow shot high in the air could distract the animal, making it look up with curiosity giving the hunter time to shoot a more powerful arrow to bring down the stationary pray.

The Decline and Resurgence of Mongolian Archery

After the reign of Genghis Khan and his descendants, the nations they conquered would gradually brake away from the empire and life in Mongolia returned largely to the old way of living, with numerous warring nomadic and semi-nomadic tribes turning their bows on each other bidding for power and dominance over the region.
From the seventeenth century, both the Russians and the Chinese began to encroach on the lands of Mongolia and they would soon come under the control of the Manchurian Qing Dynasty, inevitably changing their way of life and affecting many of their customs and traditions.
There followed a decline in the practice of archery as it was officially banned due to its military applications. However, the tradition did live on and when Mongolia became an independent nation in 1911, the use of the bow and arrow regained its popularity among the people there in just a few years, re-establishing itself as an integral part of Mongolian culture. 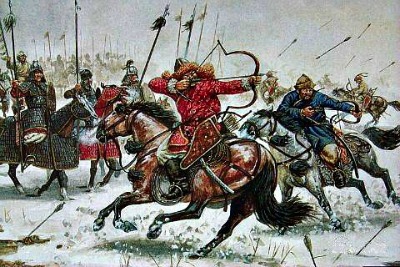 An overview of the history of archery throughout the world, from its first use by pre-civilised societies, its use in ancient warfare, its re-emergence during the medieval period and its development in the modern era.....Read Article
The History of Archery in Korea
The history of archery in Korea stretches back to pre-history and has been used in warfare there since at least the fifth century BCE. Elite archery experts helped unify the country and later would be instrumental in helping the country gain independence from China and today, South Korea are leading the way in world archery.....Read Article
Making the Native American Bow and Arrow

To make a Native American bow and arrow needed a large amount of skill. The process was complex but as it provided both food and protection to the tribe, it was a job that needed to be done to a high standard to insure optimum performance.....Read Article
Archery in Medieval England

English archers at the beginning of the later middle ages tended to be seen as lowborn and inferior warriors. However throughout the period, technological advances in bow making meant their importance on the battlefield grew, and gradually so did the social statues of archers.....Read Article