The History of Okinawan Karate

The term karate (empty hand) did not come into common usage until 1936 when it was changed by Gichin Funakoshi.
Prior to that, Okinawan martial arts were generally known as Te (Hand) or Tode (Chinese Hand).
Funakoshi made the change in an attempt to make the art more marketable to the Japanese, who at the time tended to hate all things related to China.

It is rumoured that Anko Itosu was once challenged to fight the Japanese judo champion to demonstrate Okinawan karate.
He turned up and to the astonishment of the Japanese crowd, dropped the champ with a body punch.
After helping his opponent to regain his breath, Itosu bowed respectfully and went home. 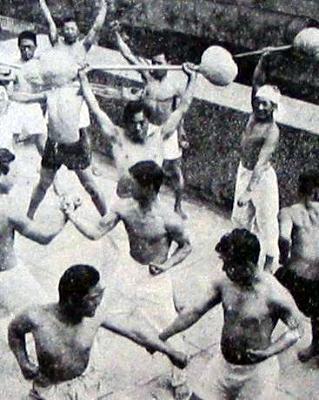 Traditional karate is studied worldwide by millions of people and is considered by many as the best martial art available as it is suitable for people of all ages, ability levels and body types. However Okinawan karate was developed in secret up until relatively recently, with only a privileged few being taught the techniques that are said to promote not only fighting prowess, but also good health and longevity of life.

Many historians trace Okinawan karate history, and indeed the history of the martial arts in East Asia to Bodhidharma, the Indian Buddhist monk who travelled to China in around 500 CE. He stayed at the Shaolin Temple where he is said to have taught the monks an ancient form of Indian martial arts known as vajramushti, which dates back to around 1000 BCE. From there it grew and developed into what we now know as kung fu and spread right throughout China.
Over the centuries, it is believed that Chinese martial artists visited Okinawa and passed on their knowledge, as did many Japanese samurai who also held great influence on the island. Over time this, combined with home-grown techniques, led to the development of a distinct Okinawan martial art known as Te, (meaning Hand) or Tode (meaning Chinese Hand).  From 1609, Okinawa was run by the Satsuma samurai clan from Japan and under their rule, weapons and martial arts in general were banned. All those who chose to practice Te had to do it in secret or risk punishment from the authorities and the lack of weapons led to the development of many empty-handed techniques (though the use of some weapons was still practiced).
As a result of the need for secrecy, very little was written down about the martial arts in Okinawa pre-twentieth century and much of what was documented unfortunately has not survived, leaving exactly what they practiced shrouded in mystery. Much of what is accepted as karate history fact comes from an oral tradition making it very difficult to know where the truth ends and martial arts legend begins.

Te had three main styles that were named after the cities in which they developed, Shuri-te, Naha-te and Tomari-te. Two main schools of Te emerged by the nineteenth century, Shorin-ryu which was developed from the Shuri and Tomari styles and Shorei-ryu, which came from the fighting style practiced at Naha.
It should be remembered that the cities were all within a few miles of each other and the styles had many similarities; the main differences were of emphasis and according to Sensei Gichin Funakoshi who studied both, they were developed based on different physical requirements.
Shorin-ryu was a quick, linear art that taught natural breathing whereas Shorei-ryu was more rooted and practiced breathing that was synchronized with each individual movement. According to Funakoshi, both styles also have links to Wu Tang and the Shaolin, which are both styles of kung fu.

In the mid-1800s, Okinawa was a place in turmoil as a result of the end of the old Samurai ways in Japan and the onset of the Meiji restoration, where the emperor once again ruled. They found themselves caught between the national interests of China, (who they had previously paid joint tribute to), Japan and America. The Okinawan king and his government were disbanded and made to become commoners, the whole city of Shuri saw mass unemployment and the forefathers of karate found themselves moving from being of the higher social class to a state of abject poverty.
Sokon ‘Bushi’ Matsumura, a military officer who was responsible for the safety of the Royal Family prior to the Meiji Restoration was instrumental in the development of Shorin-ryu, along with his student Anko Itosu. These were dangerous times for the nobility of the island but they were not permitted to carry weapons. It was around this time that Bushi Matsumura and Itosu are believed to have developed the hard style that focused on rendering an opponent unconscious with very few techniques. This replaced the submission holds, grappling and light rapid techniques of kung fu that preceded them and is believed to be the first time a style was practiced that closely resembles modern Shotokan karate.
Until the early twentieth century, the Okinawan masters trained in secret, spending three years on each kata and training extensively on a makiwara board; sparring as we know it today was not practiced though karateka would often challenge each other to fights to test their skills. Then in around 1905, Anko Itosu took the art out of secrecy and managed to get the authorities to allow him to start a program of teaching karate in the local schools.
This was one of the most significant acts in the history of Okinawan karate and brought in new era of growth that would ultimately see it go from a secretive martial art taught only to the privileged few on a small island, to being a worldwide phenomenon with ever increasing numbers by the middle of the twentieth century.

A Brief History of Karate-Do. [Internet]. 2012. The University of Hawaii. Available from: http://www2.hawaii.edu/~uhkarate/history.html [Accessed 13 November, 2012]. 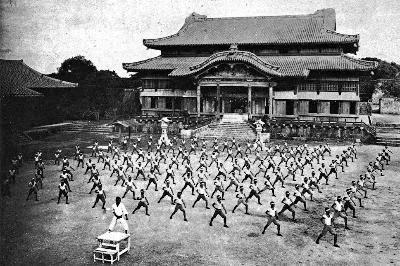 The history of karate begins in Okinawa, where martial arts were influenced by both kung fu from China, and the Japanese samurai. After weapons were banned on the island, unarmed combat techniques were developed into a style of fighting recognisable as traditional karate, which was further developed after being taken to Japan in the early twentieth century by Gichin Funakoshi.
Read Article
The Life and Legends of Anko Itosu