There were several types of crossbow used in medieval Europe such as the one and two foot crossbows favoured in England.

The names of these denote whether the weapon took one foot or both to pull back the string with the latter being harder and slower to use, but more powerful.

An account from 1055 CE written by the Anglo-Saxon Earl of Hereford known as Ralph suggests that the Welsh were using longbows by at least this time.

Ralph led an expedition into Wales and was ambushed in the mountains there where the archers attacked with such accuracy and force that, according to the Abington Chronicle, the English fled without being able to mount a defence.

One contemporary estimate of the ambush suggests the English lost five hundred men whilst the Welsh suffered no losses at all.

"William de Braose also testifies that, in the war against the Welsh, one of his men-at-arms was struck by an arrow shot at him by a Welshman.

It went right through his thigh, high up, where it was protected outside and inside the leg by his iron cuishes, and then through the skirt of his leather tunic; next it penetrated that part of the saddle which is called the alva or seat; and finally it lodged in his horse, driving in so deep that it killed the animal.

An arrow pinned the thigh of another soldier to his saddle, although the tassets of his leather tunic were there to protect him outside and inside the leg.

He tugged on the reins and pulled his horse round in a half-circle, whereupon another arrow, shot by the same bowman, hit him in exactly the same place in the other thigh, so that he was skewered to his horse on both sides.

It is difficult to see what more you could do, even if you had a ballista". 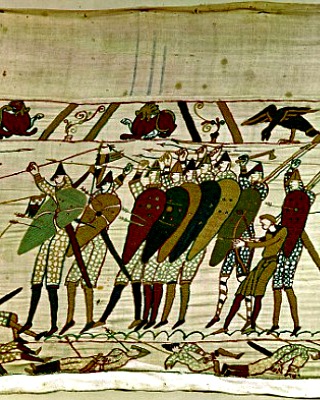 After the fall of the Roman Empire in the fifth century, the use of archery in warfare all but died out in Europe. This changed with the onset of the later medieval period when the short bow began to be seen again on the battlefield.

The short bow at the time tended to be around three feet long and drawn from the chest and while useful against un-armed civilians and for hunting, as a weapon of war its application against the armour of the day was limited at best.

Most armies did not employ archers early in the period though there are a number of notable exceptions. King Harold (r. 1066) and his adversary William I (r. 1066 – 1087) of England are known to have used them during the Battle of Hastings and they were used against the first Crusaders (1096–1099) by Turks on horseback, but with little effect.

The Vikings used the short bow extensively both on land and sea. Even Viking rulers were often very skilled with the weapon, which was in other cultures such as the Normans and the Anglo-Saxons usually reserved for low born fighters.
This can be seen from the section of the Bayeux Tapestry pictured above that shows an Anglo-Saxon archer alongside a group of Infantrymen. Not only is the archer not wearing armour, but he is also depicted as being much shorter than his fellow countrymen which may be symbolic of his inferior social status.

The crossbow is thought to originate from China in the third century CE and made its way to Europe before the fall of the Roman Empire, after which it seems to have fallen out of use.

They reappear in the literature in France in the mid-tenth century and seem to have come into common usage in Europe from the late eleventh century. Previous versions of the weapon were usually large contraptions but in the Middle Ages the crossbow began to appear as a lethal hand-held weapon.

The Normans used crossbows to good effect after the Battle of Hastings against rebellious Anglo-Saxons who generally fought with short bows. This gave the Normans a great advantage as it had a range of around 300 metres compared to only around a 200 meter shooting range with the short bow.
The crossbow did have a slower shot rate however this was more than compensated by its greater power and by the fact that it was far more accurate. The weapon was so fearsome that in 1139, papal officials in Rome decreed that it should only be used against infidels and those found using it against fellow Christians would be excommunicated.
However this ruling was largely ignored and from the twelfth century, most major armies would employ large groups of crossbowmen, often on horseback, which gave them a distinct advantage over those who did not make use of the weapon.

The reputation of a crossbowman was a mixed bag as while they were seen as valued members of an army often commanding twice the wages of ordinary foot soldiers, when captured they would be treated as harshly as common criminals as oppose to valued prisoners of war as medieval knights would be, who would often be ransomed back to their king or lord.

The deadliness and accuracy of the crossbow not only had a profound effect on warfare, it was also influential on architecture from the twelfth century. Because of its usefulness as a defensive weapon, slits were built into castle walls in order to allow for crossbowmen to fire out of and to curtail the effectiveness of enemy crossbowmen, shutters and bretaches were added to the tops of the walls of castles and other fortifications.

The popularity of the crossbow in warfare would gradually give way in Europe to another form of archery, the longbow. Generally, the longbow is between 5ft 10” – 6ft (around 1.8 meters) in height and while the invention of this lethal weapon is often credited to the Welsh, it is actually known to have been around since at least the Roman period.

Again, they probably fell out of use after the decline of the Roman Empire but were back in Europe by at least the eight century, where bows of the appropriate length have been found in Lupfen, Germany and a century later in Ireland.

Despite this, the Welsh were famous for their expert use of the longbow and the weapon was predominantly used only by English and Welsh forces, with other nations only catching up in the latter half of the later medieval period by mimicking tactics used by the English during the Hundred Years War (1337 to 1453).
It is commonly believed that the English adopted the use of the longbow under the reign of Edward I (r. 1272 – 1307) though there is little evidence to support this. However we do know that during the reign of his grandson, Edward III (r. 1327 – 1377), the weapon did gain prominence in the ranks of the English army.

Respect and Fear of the Longbow Men

It was during the Hundred Years War that longbow men seemed to gain a little respectability and many believe this happened as a direct result of events of the Battle of Poitiers in 1356 (depicted below).

The English army, led by King Edward III’s son Edward, commonly known as the Black Prince, were heavily outnumbered with an estimated 7000 armoured horses, 3000 longbow men and 100 light troops facing a combined French and German force that numbered anything from 20,000 to 50,000 troops.
However the longbow men won the day and were so ferocious in their attack that at one point they ran out of arrows so had to advance forward to retrieve arrows protruding from their enemy’s bodies.

The Black Prince had given a speech before the battle praising the archers for their bravery and skilfulness and it was not long after Poitiers that archers begin to appear as heroes in English literature, most notably in a poem from c.1377 called Piers Plowman which mentioned the outlaw Robyn Hode (Robin Hood).

Not only had the longbow men become respected within society, but they were also feared. This point is illustrated by the fact that after the Battle of Poitiers, the French started their own longbow unit who became so good that they were disbanded soon after for fear they may become too powerful.

This combination of respect and fear is also apparent in England as in 1363, it was decreed that all men were ordered to practice archery on Sundays and on holidays, a law that was to be enforced by local sheriffs. However in a bid to curtail the skill of any individual archer, it was also ordered that practice should take place at a given distance, a decree that would be reaffirmed both in 1512 and 1633.

By the end of the Hundred Years War, the Battle of Castillon fought in 1453 saw a turnaround in the fortunes of the longbow men and their weapon of choice as the same tactics that had saw them dominate previously, now proved to be their undoing.

They attacked the French artillery and were heavily defeated by the range capabilities of the cannons and muskets of their enemies in what some see as the beginning of the end of the dominance of archery in warfare, and the beginning of the age of gunpowder and the firearm.

Gerald of Wales.  2004.  The Journey Through Wales and the Description of Wales.  Penguin Classics.  London.

The History of Archery. [Internet]. 2005. University of Southampton. Available from: http://www.southampton.ac.uk/~archclub/bowhistory.php [Accessed August 18, 2014]. 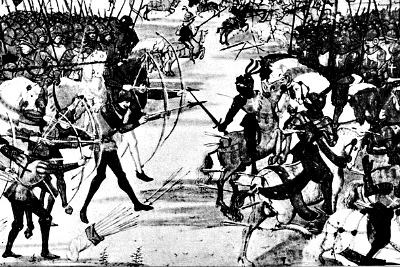 An overview of the history of archery throughout the world, from its first use by pre-civilised societies, its use in ancient warfare, its re-emergence during the medieval period and its development in the modern era.....Read Article
Mongolian Archery

Archery has been integral to Mongolian culture for millennia and used for fighting, hunting and sport. The bows they used were amongst the best in the world and coupled with the archery skills of Mongolian warriors, allowed Genghis Khan and his descendants to build one of the largest empires the world has ever seen.....Read Article
The History of Archery in Korea
The history of archery in Korea stretches back to pre-history and has been used in warfare there since at least the fifth century BCE. Elite archery experts helped unify the country and later would be instrumental in helping the country gain independence from China and today, South Korea are leading the way in world archery.....Read Article
Making the Native American Bow and Arrow

To make a Native American bow and arrow needed a large amount of skill. The process was complex but as it provided both food and protection to the tribe, it was a job that needed to be done to a high standard to insure optimum performance.....Read Article