Though better known as Mestre Besouro Manganga, his real name was Manoel Henrique Pereira but he was given his nickname to demonstrate his seemingly supernatural invisibilities.

Besouro means Beetle and represented his knack for disappearing to avoid the law.

Manganga is a type of medicine that was taken in a ritual that was believed to bring on corpo fechado (closed body) and was attributed to the capoeira fighter because of his apparent invincibility; it was even said that he could dodge bullets when necessary.

Though feared by many, Mestre Besouro had a strong sense of justice and would often strive to help people from his community.

In the post-slavery years of Brazil, black people were all too frequently being exploited and ripped off by their employers or miss-treated by law officials and others in positions of power.

Besouro became almost like a Robin Hood type of figure to many because despite extreme risk to himself, he was willing to step up and help ordinary people in these situations.

"Capoeira is the culture of the oppressed!" 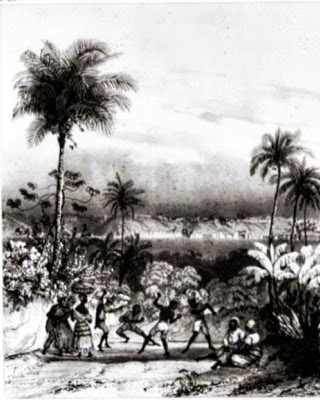 When slavery came to an end in Brazil in 1888, some of the best martial arts experts were able to make a living as leaders of gangs in the criminal underworld. Famed for their agility, cunning and fighting prowess, some Masters became legends in their own lifetime. One such figure was Mestre Besouro Manganga, who was one of the most colourful characters in the history of fighting in Brazil and was so prolific in his art that he was believed to have supernatural abilities.

At the time, capoeira in Brazil was illegal and those that wanted to learn martial arts knew they faced severe punishments if caught practicing, despite this, avoiding arrest was his specialty. Mestre Besouro learned the art from childhood and his superior skills allowed him to always be the first to escape capture during police raids; though he was shot at many times, he never got hit leading many to believe he had special powers that made him invincible.

Born in 1895, Besouro was a well-known criminal from the streets of Santa Amaro da Purificacao who commanded both fear and respect within his community. His life has provided some interesting tales that highlight the plight of warriors who lived during this period of capoeira history. In one incident, he is said to have disarmed authorities with his martial arts moves then made one soldier drink until he passed out. The soldier soon returned with ten companions to seek revenge and when they sighted Mestre Besouro, they opened fire. He fell to the ground as if hurt but when the soldiers approached, he sprung up, disarmed one and ordered them all to leave, which they promptly obeyed.
Another story tells of how he intervened when police were mistreating some people from his neighbourhood. After beating and disarming a group of them, he made a show of going to the police station and throwing their weapons in front of the building for all to see.

Although he was well respected, Besouro also made many enemies and according to Santo Amaro resident Dona Dormelinda, "When people took notice that he was in town, they would close all windows and doors". Among his adversaries was a plantation owner known as Dr Zeca, who plotted the capoeira fighter’s assassination in 1924.

Zeca asked Besouro to deliver a note knowing the Mestre was illiterate and wouldn’t be able to read the message, which simple said; "kill the man who is delivering this card". The receiver of the note invited the mestre to stay at his house for the night and in the morning, had him surrounded by forty armed soldiers.

When they opened fire, Besouro as usual appeared invincible and dodged the bullets. However this time, before he could escape he was stabbed in the back by a man named Eusebio de Quisaba. As is often the case in martial arts history, a sense of mysticism was a part of the art and like many capoeirista of the time, Besouro used magic charms, talismans and prayer to help protect him.

However the knife used by Eusebio had been specially prepared with blessings to combat this magic and was made from tucum wood, which was believed to have the power to kill an otherwise invulnerable man. Just to be sure, his assassin hired a woman to have sex with the Mestre the night before. This, it was believed, would negate his powers and while he slept, she also stole his protective charm (known as a patua).

Mestre Besouro Manganga was one of the most notorious proponents of capoeira Brazil has ever seen and to this day is a legend in world martial arts. He was still in his 20s when he died and is remembered as a hero who fought against oppression and persecution; his name synonymous as a symbol of loyalty, bravery and freedom. 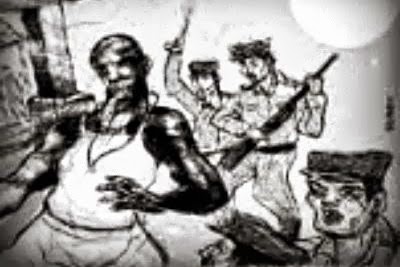 An overview of the history of capoeira from its early roots, its development by slaves in Brazil, how it flourished amongst criminals and its further development and legitimisation by Mestre Bimba in the early twentieth century.
Read Article
The Roots of Capoeira

The exact roots of capoeira are unknown and largely unstudied. This article explores the possible beginnings of capoeira history and looks at how and why it became a part of the culture amongst Brazilian slaves from the sixteenth century onward.
Read Article
Brazil’s Criminal Underworld

From the late 19th century, the criminal underworld of Brazil saw its numbers dramatically rise when slavery legally came to an end in 1888. Many skilled fighters became powerful and as many of them were capoeirista, the martial art became synonymous with criminal gangs.
Read Article

Mestre Manduca da Praia, known as ‘The Elegant Capoeira Fighter’ was a nineteenth century Brazilian martial artist who was not only a ferocious warrior, but managed to maintain his standing as a respectable business man with in his community.
Read Article
Jose Antonio do Nascimento

Jose Antonio do Nascimento was one of the best fighters of the nineteenth century. His skills earned him a fearsome reputation and his size and prowess earned him the nickname Nascimento Grande (Big Birth).
Read Article
Mestre Bimba

Mestre Bimba is important in capoeira history because of the role he played in legitimizing the art. By introducing a code of ethics, set training methods and a number of new techniques, he helped change capoeira from an illegal discipline associated with crime, to an iconic cultural pastime.
Read Article
Angola Capoeira

The Angola style of capoeira is one of the two main systems of the art and was introduced in 1942 by Mestre Pastinha. Unlike the other style, Regional capoeira, it focuses the individual development of each capoeirista as opposed to practicing set sequences and training methods and is more akin to the type of capoeira practiced prior to the 20th century.
Read Article
All Rights Reserved. Disclaimer: This site uses cookies, by continuing to use the site you agree to the cookie policy and the privacy policy. The images on this site are believed to be in the public domain, however, if any mistakes have been made and your copyright or intellectual rights have been breeched, please contact andrew@articlesonhistory.com.