As the Shaolin temples incorporate the philosophies of both Buddhist and Taoist teachings, they can be seen as a religious sect in their own right.

Many people have a problem with the connection of religion and martial arts as they incorrectly see a contradiction.

Far from being violent, kung fu teaches defence rather than attack and gives a heightened understanding of non-violent principles to those who study and train in it.

Many of the techniques found in Chinese martial arts focus on redirecting the opponents own energy and aggression against him so he only gets hurt to the extent of his own aggression.

To put it another way, an expert in kung fu is not attacking, but merely rejecting the transfer of harmful intensions from an assailant.

After many years of study, students would face one final test before becoming fully-fledged Shaolin monks. They would have to pass through the legendary 18 chambers, all of which would be a test of strength, courage, skill or intellect.

In the 18th chamber, they would take hold of a boiling hot cauldron with their bare forearms which would burn an image of a symbolic animal into their skin, one on each arm.

According to some scholars of the history of Shaolin kung fu, the symbols would change depending on what temple the new monk had trained in and may have been; The Henan Temple – Two dragons

Much of the history of kung fu has a long oral tradition and some scholars question the validity of a lot of what is believed.

This is true of the aftermath of the Ching takeover in China for example and the grandmasters who are claimed to have escaped the burning Shaolin Temple may be metaphors or totally made up.

Whether or not Chang Sanfeng invented Tai Chi Chuan is another example and while the whole truth on these and other kung fu history facts may never be known, it should be remembered that oral traditions usually carry some truth.

They are not necessarily less trust worthy than written evidence so more research on the subject is certainly required before too many conclusions can be made. 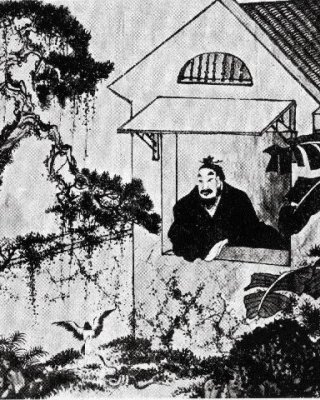 While there is a tradition of martial arts in China that dates back to at least 2,674 BCE, for many, modern day kung fu began when an Indian monk known as Bodhidharma arrived at the Shaolin Temple in the Henan Province around 527 CE.

He came to spread the concept of Ch'an (Zen) Buddhism and noticed that though learned, many of the monks were physically unfit. In a bid to help with this, he introduced a series of exercises to them through two books, the Yin Gin Ching and the Shi Sui Ching.

While it is uncertain how much of the Bodhidharma story is real and how much is legend, it is true that people did travel between India and China. The journey would have been dangerous so many rich merchants and monks would have hired bodyguards or learned to fight to protect themselves from wild animals and bandits.

Over time, these fighting monks adapted the moves taught by Bodhidharma into early versions of Chinese martial arts techniques that developed through the early history of the Shaolin into rudimentary forms of kung fu.

As their fighting prowess grew, their skills began to be called upon by leading political figures to take action in times of war. One famous example of this happened sometime in the 7th century when Emperor T'ai Tsung asked the Shaolin monks to aid him in retrieving his son, who had been kidnapped by his enemy General Wang-Shih-Chung.

Legend has it that the temple sent 13 monks, who aided the emperor’s army in defeating the rebellious general and in rescuing his son; as a reward they were given 600 acres of land and their main temple in Henan was given the title Number One Temple.

Over the years, the monks allied with other leaders involved in conflicts but were not always on the winning side which sometimes led to them seeking refuge in other areas. As they did so, they took their religious and martial arts teaching with them and many other temples became a part of the Shaolin sect, most notably;
The temples were, in many regards, like universities and students would have to learn many subjects in order to graduate such as religion, philosophy, medicine and of course martial arts.

Further Developments in the Early History of Shaolin Kung Fu

Geological Factors - Many different styles of fighting have evolved in China and exactly how this happened was often dependent on geological factors. In the South it is often wet and muddy which has given over to greater emphasis on hand to hand combat and in crowded areas such as the sea ports, grappling techniques are more common. In the north, it is dryer and tends to be more open so longer range techniques such as jumping kicks prospered, though this is very general and there is a large amount of overlap.

Chueh Yuan & Pai Yu-Feng - At the beginning of the 10th century, the history of Shaolin kung fu saw important developments when a young monk by the name of Chueh Yuan reformed the martial arts being practiced there when he created the 72 Movements. They focused on both internal and external fitness and once devised, Chueh Yuan began a journey to teach his new style and to learn from others.

While on his travels, Chueh Yuan met a master named Pai Yu-Feng who was knowledgeable in the body’s pressure points; the two teamed up and combined their knowledge to create 170 exercises that became the basis of modern Shaolin kung fu.

This also began a tradition of monks leaving the temple to learn from outsiders once they attained a certain level of mastery in the martial arts. This was done so that they could bring back new skills and teachings when they returned to the temple to which they belonged.

Chang Sanfeng - In 1417, a monk connected to the Wu-Tang temple by the name of Chang Sanfeng is believed by some to have developed a style that was more reminiscent of the Taoist philosophies of a bygone era. It focused on internal energy and harmony and was inspired, so the legend goes, when he watched a fight between a snake and a bird (depicted above).

It is hard to know how much of this story is true and how much fabricated later but it seems a system was developed at the time that would evolve into modern day Tai Chi Chuan (Mind Fist).

These new systems combined the hard and soft aspects of Chinese martial arts and were not only fighting techniques, but showed ways to handle situations in everyday life.They were devised to represent different aspects of human development through metaphor, they were;

The End of an Era

Shaolin kung fu styles continued to develop and be handed down from one generation of monks to the next until in 1644, China saw a regime change. After almost 300 years of rule, the Ming Dynasty was overthrown by the Ching (Qing) Dynasty, who did not favour the monks of the Shaolin or their teachings.

A short time later, they destroyed the temple in the Henan Province killing most of the monks in the process, however a few grandmasters did survive. They went into hiding and some found students to pass on their kung fu knowledge to.
This now had to be done in secret and from these masters, several new styles emerged that would form the basis of the main types of martial arts practiced in China today. According to kung fu legend they included Bok Fu, Pak Mei, Wing Chun and Hung Gar. 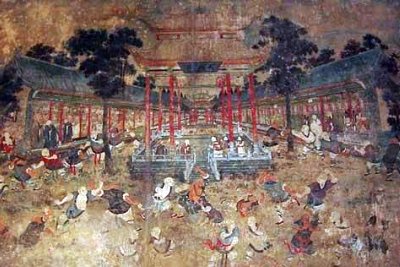 Bodhidharma is given credit for founding modern day Chinese martial arts after visiting the Shaolin Temple in the sixth century. It is said he taught various exercises to the monks there, laying the seeds for the fighting systems that are today collectively known as Kung Fu......Read Article
Zhang Sanfeng

Zhang Sanfeng who, according to legend, was the founder of an internal Chinese martial art known as Mien Chuen that would evolve into Tai Chi Chuan. After spending many years training in the Shaolin Temple, he made his way to the Wu Tang Mountains where he developed his new style after watching a fight between a snake and a crane.....Read Article
The History of Tai Chi Chuan
Tai Chi utilises internal energy, known as Chi, along with physical movements, breathing techniques and meditations. It can be practiced as a martial art or purely for the health benefits it promotes, which include strength, balance, agility, flexibility and stamina along with improved concentration, relaxation and lowered stress levels.....Read Article
The Shaolin in the Modern Era

The history of the Shaolin in the modern era has not been an easy one. The practice of Chinese martial arts was banned for much of the period and the monks considered enemies of the state because of their political ideologies and later their religious beliefs.....Read Article

Pak Mei was one of the famous Five Elders of Shaolin kung fu who developed the fighting system that would take his name. The system is a lethal combination of fighting techniques that combine the explosive power of the tiger with the dynamic speed of the leopard.....Read Article
Ving Tsun Kung Fu