When Kenwa Mabuni first started his karate school in Japan in 1929, he named the style Hanko (half-hard).
However, within a few years he had renamed it to its current name, Shito-Ryu, which he derived from the first two Okinawan characters from the family name of each of his original masters, know to us as Anko Itosu and Kanryo Higaonna, (with Ryu meaning school).

When sparring with his students, Kenwa Mabuni would invite continued attacks from them while he just moved out of the way and blocked, repeatedly asking the student, “now do you understand".
This would have not only encouraged the student to improve his attacking skills, but clearly demonstrated the importance f defence as you cannot lose a fight if you do not get hit.

Kenwa Mabuni (1889 – 1952) was a member of the warrior class on Okinawa and came from a long line of fighters from the Onigusukini samurai family, who served the ruling elite on the island for hundreds of years.
Growing up Mabuni was a weak and sickly child but at the age of thirteen, he started learning martial arts under the renowned master Anko Itosu (commonly considered the grandfather of modern-day karate) of the Shuri-Te school, .
He trained every day and his health soon began to improve and as he grew stronger, he excelled at the martial arts under the guidance of his teacher.
Later in around 1909, he began studying the Naha-Te style of Okinawan martial arts under Kanryo Higaonna, who he had been introduced to by his friend Chojun Miyagi (who would later found Goju-Ryu karate). While in Naha, he also studied under another great master, Seisho Arakaki who taught him to use weapons effectively, in particular the bo staff and sai, along with various weapons kata.

Advanced Training in the Martial Arts

After finishing high school and the required military service that followed it, Sensei Mabuni became a police officer on Okinawa and was a respected member of the community known for his fairness and sense of justice for all. Though by now he was an accomplished karateka in his own right, he continued studying with his masters until in 1915, both Itosu and Higaonna passed away within a short time of each other which would have devastated Mabuni and their other students. After the death of his original teacher Itosu, Mabuni is said to have built a shrine near the site of his grave and practiced kata there daily for an entire year to honour the great master.
A few years later, along with other up and coming Okinawan karateka such as Chojun Miyagi and Gichin Funakoshi (who would later found Shotokan karate), he was involved in a dojo called Ryukyu Tode Kenkyu Kai (the Okinawan Karate Research Club). Another master involved in the project was Woo Yin Gue, a Chinese tea merchant living on Okinawa who taught Kenwa Mabuni Fukien Province White Crane kung fu, which is believed to have influenced the Shito-Ryu kata Rohai and Nipaipo.
In 1918, Mabuni was one of the members of the Ryukyu Tode Kenkyu Kai chosen to demonstrate Okinawan karate, then known as Tode or Te, to visiting members of the Japanese Royal family who were so impressed they ask the club to send a representative to teach the art in Japan. In 1922, Gichin Funakoshi was chosen for the task but other members, including Master Mabuni, made frequent trips to Japan to teach.

The Development of Shito-Ryu Karate

In the meantime, Mabuni continued with the development of his art by training with and sharing knowledge with the other members of the Ryukyu Tode Kenkyu Kai. In 1924, Mabuni was asked, along with his friend Chojun Miyagi, to head up the training sessions of the club. Together they stressed the importance of regular sparring in order to practice attacks and defensive moves on a moving opponent while improving control and the intensity of the techniques they used.
in 1929 at the age of thirty-nine, Master Mabuni permanently moved to the city of Osaka in Japan to teach is own style of karate, Shito-Ryu. It was a unique blend of Okinawan karate styles and included some kung fu as Mabuni took the best of what he had learned from his teachers to form a coherent version of the martial art that today is practiced by millions of people across the world.
The main philosophy of Kenwa Mabuni’s teachings were laid out in the Go Do Shin (Five Way Spirit/Path) of Shito-Ryu Karate:
Early in the history of Shito-Ryu, Mabuni had to work hard to get his style accepted by the populace of Osaka. He performed many public demonstrations which included breaking bricks and boards with his hands and feet. He also gave free lessons to various police stations across Japan and established the Dai Nihon Karate Do Kai in 1931, the forerunner to the modern-day World Shito-Kai Karate-Do Federation.
Gradually the style took hold and Sensei Mabuni found more and more students, both at his dojo in Osaka and at universities that wanted to form dojos of their own. During World War Two, membership dropped in his clubs due to so many young men fighting in the conflict and like many others, Mabuni suffered great poverty during this period but persevered with his chosen art.
Once the war had ended, things began to improve and karate student numbers rose across the country. His senior students helped further the development of Shito-Ryu history by opening clubs of their own across Japan and by the time of his death in 1952, the style was becoming increasingly popular.
Kenwa Mabuni’s son, Kenzo, took over as head of Shito-Ryu Karate and dedicated his life to teaching the art his father developed. Over the years, he and other masters who had been taught by Kenwa started to teach outside of Japan which led in time to Shito-Ryu becoming one of the four main traditional karate styles and one of the most practiced and best loved world martial arts there is. 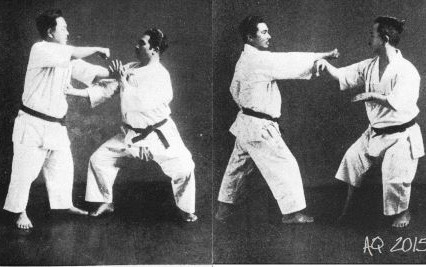