This means that every time he aimed a technique at someone, he attempted to make it the perfect attack.

One night while at a dance, Mas Oyama came to the aid of a girl who was being accosted by a thug.

The troublemaker, already suspected of murder, pulled a knife and lunged prompting the karateka to block and counter with a head punch; the blow killed the assailant outright which devastated Oyama.

To atone, he went to work on the farm where his opponent’s wife and child lived, staying until she was financially capable of running it and assured him that she did not hold him responsible for the death of her husband.

"A human life gains lustre and strength only when it’s polished and tempered". 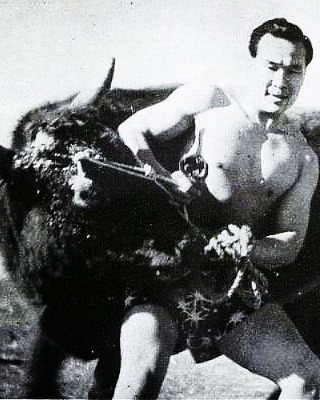 Sosai Masutatsu Oyama, commonly known as Mas Oyama, was born into an aristocratic family in a small village in South Korea in 1923.

At the age of 9, he began studying Southern Chinese Kempo under the tutelage of Mr Yi, an employee on his father’s farm. Then at the age of 15 he moved to Japan where he joined the Yamanashi Youth Air Force Academy and then the Imperial Japanese Army.

Later the same year, he became the student of Gichin Funakoshi and by 1941 aged 18, he was already a second Dan black belt, progressing to fourth Dan before he was 21.

Oyama would always refer to Funakoshi as his true karate teacher and would later state that of all the things he learned from the founder of the Shotokan system, kata was the most important.

After the end of World War Two, Oyama began to train under fellow Korean Nei-Chu So, an exponent of the Goju Ryu style and one of Gogen The Cat Yamaguchi’s best students. He also took up Judo at this time and within four years was a fourth degree black belt in the discipline.

After becoming disillusioned with his martial arts training, Oyama decided to throw everything he had at it so he went to the top of Mount Minobu in the Chiba Prefecture, the same place the great samurai Miyamoto Musashi is said to have received inspiration for his double sword system.

Oyama stayed there for eighteen months, testing himself against nature with gruelling training methods that included;

He would rise at five in the morning and once his training was done, would read extensively from martial arts manuals and from Buddhist texts. He would finish the day with contemplative meditation; it was here that he began to develop the ideas that would form his own style, kyokushin karate, and where he first though of the idea of testing his abilities by fighting a bull.

When he left the mountain and returned to civilisation, he entered the first All Japan Karate Tournament held in Kyoto, which he won. Despite his victory, he still felt that something was lacking in his karate so he went back into isolation, this time heading for Mount Kiyosumi for another year of fourteen hour a day training sessions and continuous contemplation and reflection.

When he returned, he decided that he wanted to take on the ultimate challenge in a life and death contest with a bull (pictured above). He undertook this challenge fifty-two times; three of them were killed instantly by his strikes and forty-nine had their horns taken clean off by his knife hand strike.

While this seems a little untoward to the modern reader due to the cruelty to animals aspect, it must be remembered that this was in the 1950s and people had a totally different mentality then (the animals he fought were also all ready for slaughter so would have died anyway).

As a feat of strength, bravery and a demonstration of devastating technique, Mas Oyama’s bull fights are unparalleled. That said, his first attempt in 1957 did not go too well and even though he eventually won, he was bed ridden for six months from injuries sustained from the fight.

Not content with fighting dumb animals, he also took on more than 270 people over the years, many of whom were beaten with one punch; most contests lasted a matter of seconds and none over three minutes.

Oyama had made his bones so strong that even when his attack was blocked, he would often break the bones of his opponent’s blocking arm and while his hands were legendary, he was also known for his powerful head kicks.
As well as fighting in over 270 one-on-one contests, Mas Oyama participated three times in his famous one-hundred man kumite. He invented this to further test his abilities by taking on one fighter after another over the space of three days. It is rumoured that the first time he did this, he wanted to go a fourth day but none of the participants were willing to carry on over the agreed upon period.
He travelled the world to fight, teach and establish dojos; he would fight anybody from any style and in doing so gained enough fame to make his style, kyokushin karate (the search for the ultimate truth), one that is today practiced worldwide with over 15 million members. His legacy also includes a number of books that are amongst the most read karate books ever.

At the age of 71 in 1994, Master Sosai Masutatsu Oyama died, losing just about the only battle of his illustrious life, to lung cancer. 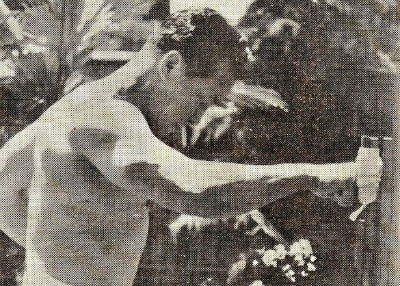 An overview of the history of karate, from its creation and development on Okinawa, to its introduction to Japan by Gichin Funakoshi and from there its growth into one of the most popular martial arts in the world today.....Read Article
The History of Okinawan Karate

A look at the three regional styles that made up earliest forms of karate that were practiced on the island of Okinawa and how they developed into the styles that are popular all over the world today....Read Article
The Life and Legends of Anko Itosu

Anko Itosu was a legendary martial artist and a pioneer in the development of karate. He popularised many aspects of the fighting system and helped increase the number of people who learn the martial art by teaching it in the schools.....Read Article

Gichin Funakoshi, is revered as an innovator within the Okinawan martial art. He was instrumental in the spread of karate to Japan and played a big part in modernising many of the techniques and kata, bring karate into the modern era.....Read Article
The History of the Shotokan Kata – Part One

A rundown on the history of some of the kata in Shotokan karate, looking at where they originated and how they developed over the years. The list includes Kihon kata, the Heian kata, the Tekki group, Bassai Dai and Sho, Empi, Hangetsu, Kanku Sho and Dai, Jion, Ji’in and Jitte.....Read Article
The History of the Shotokan Kata – Part Two

A rundown on the history of some of the more advanced kata in the Shotokan karate sylibus, looking at their origins and development over the years. The list includes Wankan, Gankaku, Meikyo, Chinte, Gojushiho Sho and Dai, Sochin, Nijushiho and Unsu...... Read Article
Kenwa Mabuni – Founder of Shito-Ryu Karate
Kenwa Mabuni started life as a sickly child but transformed himself into a strong warrior through the practice of karate. By studying with a number of great masters, he was able to combine what he learned and develop one of the most popular styles of karate today, Shito-Ryu…..Read More
Hienori Otsuka - Founder of Wado-Ryu Karate

By the age of 28, Hienori Otsuka was a renowned master at jujitsu before becoming a student of Gichin Funakoshi. He excelled at karate, quickly rising through the ranks to become an assistant instructor and helping to develop training techniques in Shotokan karate. Later, he broke away to form his own style of karate, Wado-Ryu......Read Article
The Real Mr Miyagi

Sensei Chojun Miyagi was an Okinawan karate master who developed the style Goju Ryu. By learning martial arts from both China and his homeland, he was able to incorporate both internal and external techniques.....Read Article