In 1935, a group of students and benefactors clubbed together and paid for the first purpose-built dojo in Japanese karate history.
Over the door was the name Shoto-kan; Shoto was what Gichin Funakoshi used as a pen name for his calligraphy and means Pine Waves and Kan means building or house. Shotokan can therefore be said to mean the House of Pine Waves.

Gichin Funakoshi only fought a small number of times in his life, with one occasion being when he was in his late 80s and against a much younger would-be mugger.
When attacked, the wise old master thrust his hand and gripped the assailants groin area, then marched him off to the police station.
Despite the fact that the mugger instigated the situation, Sensei Funakoshi regretted resorting to violence afterward.

True karate is this: that in daily life one's mind and body be trained and developed in a spirit of humility, and that in critical times, one be devoted utterly to the cause of justice. 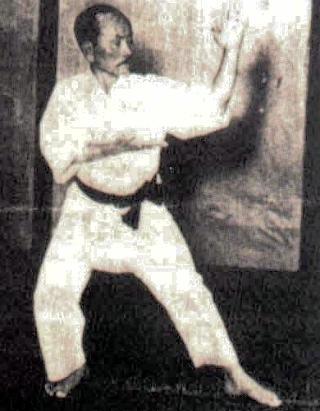 Gichin Funakoshi is commonly known as the father of modern-day karate and is probably the best-known name in karate history. He was born in the city of Shuri on the island of Okinawa in 1868 and by the age of 11, was training with the great Okinawan teachers Anko Itosu and Yasutsune Azato.
At this time it was illegal to learn Okinawan martial arts, though that did not stop him and many others practicing in secret. Around the turn of the century the art came out into the open and began to be taught in public schools, thanks largely to the efforts of Anko Itosu.

By the time Funakoshi was an adult he excelled in karate, so much so that when the Crown Prince of Japan, Hirohito, visited Okinawa, Funakoshi was chosen to perform a demonstration for him. When the Japanese Ministry of Education held a demonstration of karate in Tokyo a year later in 1922, the Okinawan Department of Education who he worked for as a schoolteacher asked him to be the one to perform it and introduce the art to Japan; when he did, a new era in the history of the Japanese martial arts was born.
The people there were so impressed that he was asked to stay in the country to further demonstrate and teach his art, beginning with an invitation from Jigoro Kano, the founder of Judo, who asked Funakoshi to demonstrate karate in front of over one hundred of his students. After this, the requests kept coming so Sensei Funakoshi decided to move to Japan permanently. He quickly gained students in the universities in and around Tokyo and soon he had enough interest to start his own dojo.

The Development of Shotokan Karate

Gichin Funakoshi earned the title the father of modern-day karate in a number of ways. One was that he adapted the training methods so that they could be more easily practiced by everybody, regardless of age, ability or sex. He also made karate more accessible to the Japanese by changing the meaning of the word Kara.
Originally the meaning used was Chinese with Te meaning hand but the characters used for Kara could also mean empty in Japanese. As this fitted the style so well and because karate had developed to be very different from Chinese martial arts styles, it became the new meaning of the word. He also changed the name of many of the kata, again making them more acceptable to a Japanese culture that often hated everything that was Chinese.
Amongst his more prominent beliefs was his conviction that the best martial arts exponents should be so confident that they had nothing to prove about their fighting prowess. The true art was found in subduing an opponent without fighting, echoing the teachings of the legendary samurai Tsukahara Bokuden from over 400 years previously.
In 1955, Sensei Gichin Funakoshi made another momentous contribution to Shotokan karate history when he was instrumental in founding the Japanese Karate Association (JKA). Funakoshi was the chief instructor but unfortunately, the great Master died not long after in 1957. However, through his most senior students such as Hidetaka Nishiyama and Masatoshi Nakayama, Shotokan karate lived on and grew. Today, it is practiced by millions of students and is a famous fighting system, respected and feared throughout the world. 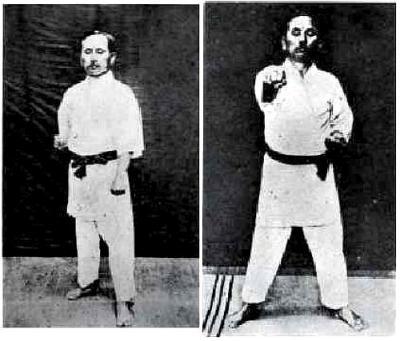 The History of the Shotokan Kata – Part One