Goju Ryu literally means Hard (Go) Soft (Ju) Style (Ryu) and is based on the Chinese principle of two opposing forces that govern everything in the universe, Yin and Yang.

Chojun Miyagi emphasised the importance of correct breathing while practicing karate and created the breathing exercise known as Ibuki, which combines external and internal breathing techniques.
The two types of Ibuki are, Yo Ibuki, which is employed as a training method and is a strong hissing sound which aids in dynamic tension training, and In Ibuki, which is used in combat or while training and is nasal in nature.
The combination of these breathing techniques promotes rejuvenation of energy and ensures the body is exercised both internally and externally.

"People often misunderstand karate. When they see someone breaking five wooden boards or a few pieces of roof tile with his or her fist, they think it is a main part of karate.

Like other fighting arts, the truth of karate or Tao of karate can be understood and mastered at the ultimate goal, which is beyond teachings and impossible to describe by words."
~ Chojun Miyagi ~ 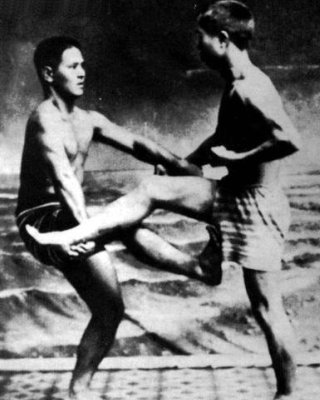 Everybody of a certain age remembers the character Mr Miyagi from the hit 1980s movie The Karate Kid. However, what many people do not realise is the wise old karate teacher was in fact based on a real-life master from Okinawa who founded one of the most successful forms of the martial art, Goju-Ryu karate.

Sensei Chojun Miyagi (1888 – 1953) began his training at an early age and when he turned 14, he was sent to study under the great master Kanryo Higaonna. While working in China, Higaonna had the opportunity to study kung fu and blended his new knowledge with the style he himself had been taught in his hometown of Naha (later this style would become known as Naha-te).
Though training was extremely hard, the young Miyagi excelled and through great determination and a large amount of raw natural talent, was able to progress in the art very quickly. After his teacher’s death in 1915, Miyagi also went to China and though he did not intend to learn Chinese martial arts, what he saw there piqued his interest so he began studying.
He attended the Pakua Chan School that emphasised the soft aspects of the martial arts and was particularly interested in the internal systems and breathing techniques they taught there that promoted inner peace and harmony of the mind, body and spirit. He also studied at the School of Shaolin Chuan which had a more external focus on training adding to the hard techniques he had learned from Okinawan martial arts.

The Development of Goju-Ryu Karate

The hard aspect of Goju-Ryu incorporates open handed blocking with a circular motion along with strong punching and striking techniques. The legs are also utilised effectively and while high kicks are popular today, Miyagi taught that kicks should be kept low in order to maximise their effectiveness while minimising the risk (as high kicks are less likely to hit the target and may result in a loss of balance). Goju-Ryu karate also incorporates the use of many other types of technique including sweeps, throws, joint locks and grappling.
In the early twentieth century, Okinawan karate masters were in great demand in Japan which appealed to Miyagi, so he went and began teaching classes at Kyoto University. However after a while he became homesick and returned to Okinawa, taking some of his best students with him. One of Sensei Chonju Miyagi’s students who did not follow him back to his homeland however was Gogen Yamaguchi, who instead stayed in Japan and became a very successful teacher there. Known as The Cat because of his agility, cunning and speed when fighting, he further developed the style by organizing it into the system that is used all over the world today, forming the association known as Goju Kai.
Chonju Miyagi spent the rest of his life developing and teaching Goju-Ryu karate while Yamaguchi did likewise in Japan. On his deathbed, the founder of the style named Yamaguchi as his successor, before passing away on 8 October 1953 at the age of 65. Today, his legacy lives on and he is considered a legend of martial arts history. His name will always be remembered through the style he created which despite some modifications down the years, is still easily recognisable as the karate of the real Mr Miyagi. 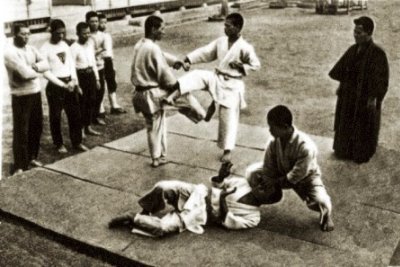 Hironori Otsuka was a renowned master of jujitsu by the age of 28 before becoming a karate student under Gichin Funakoshi. He excelled and quickly rose through the ranks to become an assistant instructor, helping to develop training techniques in Shotokan karate. Later, Master Otsuka would brake away and form Wado-Ryu, one of the main four styles of traditional karate.
Read Article
Mas Oyama – Founder of Kyokushin Karate