Originally in boxing there were no weight divisions so most fighters tended to be what would today be classed as heavyweights.

However before the turn of the 20th century, a number of new weight categories were being introduced. Though more have been added over the years, the initial ones and their first champions were;

Featherweight (9st and under) – First won by Billy Murphy (Australia) in 1890.

Middleweight (11st 6lb and under) – First won by Jack Dempsey (USA) in 1884 (Not to be confused with his heavyweight namesake of the 20th century).

When Jack Johnson became the first black heavyweight champion, a national hunt was sparked to find the White Hope who could defeat him.

Hard men, drawn from many quarters including farms, mines, factories, jails and even straight off the street were trained up and given a shot against the great Jack Johnson, who dispatched over thirty of them during his seven year reign from 1908 - 1915.

"There is today some brutality connected with boxing...Certainly it is a highly civilized pastime as compared with the international game of war which produces so many “heroes” and “national monuments.”

Boxing has fallen into disfavor—into very great disfavor. The cause is clear: Jack Johnson...has out-sparred an Irishman.

He did it with little brutality, the utmost fairness and great good nature. He did not “knock” his opponent senseless.

Apparently he did not even try....Why then this thrill of national disgust?

Because Johnson is Black. Of course some pretend to object to Johnson’s character. But we have yet to hear, in the case of White America, that marital troubles have disqualified prize fighters or ball players or even statesmen.

It comes down, then, after all to this unforgivable blackness. 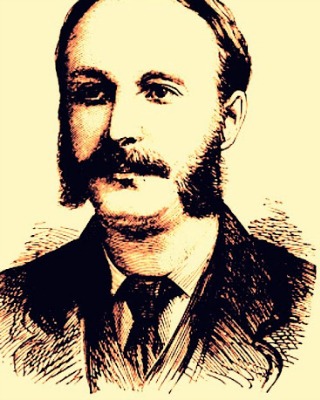 In the nineteenth century, the major development in the sport that made boxing what it is today was the introduction of the Queensbury Rules, sponsored by the Marquis of Queensberry John Sholto Douglas and invented by John Graham Chambers (pictured).

Prior to this, bare knuckle boxing was a much more brutal affair with few regulations other than those laid down in the previous century by John ‘Jack’ Broughton.

Starting from 1867, the new rules saw boxing gloves used for the first time in professional contests and three minute rounds were introduced to replace the rule that a round would continue until someone went to ground.
The ten second count was also brought in and a ban on hugging and wrestling moves was added to the prohibition of grasping and hitting below the belt (which was already in place by this time).

With the introduction of the Queensbury Rules, boxing began to become legitimised leading to anti-boxing laws being relaxed and less enforced over time. In this environment, the boxing booths that toured America and Britain as carnival attractions flourished, a movement that was pioneered by the former bare knuckle heavyweight champion Jem Mace.

As a well-loved champ, Mace was in a position to help the new rules take hold. He did so not only as a fighter, but also by promoting other boxers and through touring America with his booth and putting on exhibitions.

In the late nineteenth century and on through to the mid-twentieth century, the popularity of boxing booths grew. Often no more than a tent with a raised platform in the middle for the bouts, crowds would watch exhibition fights and could even pay to try to go a set number of rounds with a professional fighter; if they won, they would get a prize that amounted to more than a week’s wages for many, though this would probably have been a rare expense for the owner of the booth.

At the end of the show, the crowd would throw coins into the ring or a hat that was passed around and these tips, or nobbings as they were known, would be shared amongst the carnival fighters. While the best pugilists could earn a reasonable about of money from the booths, it was hard work with fighters often having to be involved in several shows a day.

In the mid-twentieth century, the various licencing organisations began to restrict the participation and then ban their fighters from the boxing booth circuit and by the 1970s, they were a thing of the past.

Despite the introduction of the new rules, bare knuckle fighting still took place amongst some fighters in both America and Britain. One particularly brutal group from Wales were collectively known as the Mountain Men, most of whom were miners looking to earn extra money though some were full time fighters.

Operating around the turn of the twentieth century, they acquired their name because they usually fought on the side of the Welsh hills and mountains. A makeshift boxing ring would be set up by putting four sticks in the ground and tying a rope around them and like the booth fighters, the mountain Men would rely on nobbings for payment.

Another inventive way they fought was to bury the fighters up to their waist in earth so all they could do was slug each other until one opponent was unconscious, the other being declared the winner.

One of the most feared and respected of the Mountain Men was Lewis Roderick, whose wrists were so misshapen from his career that when the police tried to arrest him, their cuffs would not go over them. Roderick was unfortunately involved in one too many of these savage fights and ended up going mad.

Brain damage and deaths were relatively common on the bare knuckle circuit and sometimes manslaughter charges were brought against the surviving boxer involved in the illegal contest when things went wrong.

A particularly distasteful side of late 19th century boxing was the so-called Battle Royale. This was where a group of up to ten young black fighters would slug it out in some back-street venue and keep fighting until only one was left standing.
To make it more entertaining for the jeering crowd, the youngsters were often blindfolded and the onlookers, usually white men, would bet on the outcome, rewarding the winner with nobbings at the end of the contest.
While there had been a long tradition of black boxers, by the early-twentieth century it was extremely difficult for the best of them to fully reach their potential. Against the odds, Joe Gans won the world lightweight championship in 1902 but was frequently made to loose fights or underperform against inferior challengers who happened to be white.
A few years later in 1908, the American Jack Johnson became the first black heavyweight champion of the world but not before following the former champ, Tommy Burns, all around the world and challenging him at the end of all his tour fights.

When the fight finally happened Johnson demolished Burns, a victory that was widely considered a national upset. Everybody from sports writers, fans and even politicians protested the idea of having a black champion fearing that Johnson’s victory would cause race riots, a fear that unfortunately turned out to be well founded.

After defending his title in 1910 against James J. Jeffries, commonly known as the original Great White Hope (pictured below), there were more race riots in twenty-five states and fifty cities across the country. Twenty-three black people and two white people were reported to have been killed during the disturbances and several lynching attempts were prevented by authorities.

The whole of the white population of America seemed to want Johnson beat in the ring and in a bid to prevent further civil unrest, he would often have to take it easy against white opponents for the first seven or eight rounds before going after the knock out, which he usually achieved.

John L. Sullivan, champion from 1882 – 1892 refused point blank to fight black fighters and after Jack Johnson’s reign, the tradition continued with the likes of Jim Corbett and Jack Dempsey unwilling to fight against the best black challengers. Even Johnson himself openly refused to fight other black boxers such as Sam Langford as there was little money to be made from it.
It can be argued that black boxers only began to be seen as equals in the boxing ring in America after Joe Louis beat the German fighter Max Schmeling in 1938. The press built the fight as a battle between America and Nazi Germany and when Louis won the fight in the first round, he became a national hero for all races and a symbol of the superiority of democracy over fascism.

In Britain, the situation was even worse as in 1909, the Lonsdale Belts were set up but excluded black boxers from competing. The ban wasn’t lifted by the British Boxing Board of Control until 1948, when Dick Turpin defeated Vince Hawkins to become the middleweight champion. 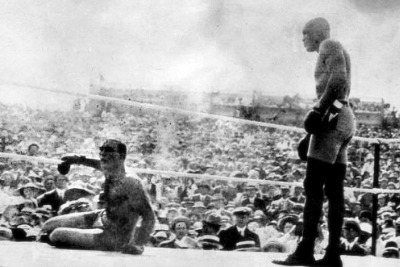 A look at the many fighters who are credited with holding the bare knuckle boxing title in the 19th century. From Jem Belcher, who held the distinction at the turn of the century, to Jem Mace, who made the switch to using boxing gloves following the introduction of the Queensbury Rules.....Read Article
Sam Langford