Born Cassius Marcellus Clay, the great heavyweight changed his name after joining the Muslim organisation known as the Nation of Islam.

The day after winning the world heavy weight title for the first time in 1964, he announced that his name was now Cassius X, inspired by his mentor Malcolm X with the X being symbolic of the unknown name taken from his ancestors during the days of the transatlantic slave trade.

However when Malcolm X was suspended from the organisation, Cassius was given the new name Muhammad Ali by the Nation of Islam’s founder, the Honourable Elijah Muhammad.

Muhammad Ali was first introduced to boxing after his bike got stolen.

He found a police officer, Joe Martin, who also happened to be a boxing trainer and after being told by the 12 year old that he was going to “whup” the thief, Martin responded by telling him “you better learn to box first”.

Within weeks, the young fighter had his first win under his belt and set himself apart from others with is dedication and relentless training.

He finished his career with a record of 56 wins (37 by knockout) and 5 defeats and is today regarded by many as the greatest heavyweight boxer of all time.

"Impossible is just a big word thrown around by small men who find it easier to live in the world they’ve been given than to explore the power they have to change it.

Impossible is not a fact. It’s an opinion.

Impossible is not a declaration. It’s a dare.

Following Iraq’s invasion of Kuwait in 1990, Saddam Hussein devised a plot to stave off American attacks by strategically placing foreign hostages (or ‘guests’ as he called them) in key locations. As one of the most famous and admired Muslims in the world, it was decided that Muhammad Ali would be an ideal ambassador to go over and negotiate the release of the fifteen Americans being used as ‘human shields’.

Ali was six years into his fight with Parkinson’s disease by this time and came under fire from certain sections of the press who accused him of only being interested in boosting his own profile. Undeterred, he met with Saddam Hussein and successfully negotiated with the dictator; Ali left Iraq on December 2, 1990 along with the fifteen men, all the while insisting that they do not thank him but instead give credit to Allah.

When Ali lost his final fight to Larry Holmes in 1980, a young Mike Tyson was watching on TV with his trainer, Cus D’Amato. Tyson stated;

"I was offended by how bad he beat up Ali……we were all so upset. The next morning, Cus was on the phone with Muhammad Ali after taking this shellacking from Holmes. He said to Ali, ‘I have this young black kid who is going to be heavyweight champion someday and I want you to talk to him.'"

When he got on the phone, the 14 year old future champ told his idol, "When I grow up, I'll fight Holmes and I'll get him back for you," a promise that Tyson duly kept.

Seven years later Tyson, by this time the undisputed heavyweight champion, met Holmes in the ring. Ali was a guest at the fight and when he entered the ring before the first bell to shake the fighter’s hands, he whispered to Tyson, "Remember what you said – get him for me." Holmes was demolished in the fight that ensued and was knocked out in the fourth round after a vicious array of right hooks.

During the time Ali was serving his ban from boxing for refusing to fight in Vietnam in the late 1960s, a radio show was ‘deciding’ who the greatest heavyweight boxer of all time was. Fights were acted out on the show, with the results being decided by a second-generation NCR 315 computer, packed with 5k of handmade core memory.

It was predicted that Ali would lose in the quarter final stage to Jim Jeffries which left him furious. He declared that the government had taken his title and now the man responsible for the simulated fights, Murry Woroner, was trying to take his good name by suggesting he would lose to a man he described as "history's clumsiest, most slow-footed heavyweight."

The former champ threatened to sue for defamation with a $1 million law suit. However an agreement was made by the two parties when he was offered nearly $10,000 to fight Rocky Marciano (who won the initial computer generated competition) in a demonstration fight that would be aired in cinemas all over the country, with the result decided by the computer.

The ‘fight’ was filmed in 1969 with the two throwing light punches for seventy, one minute rounds with several endings filmed so the result would not leak before the battle was aired. When it did, it played out much like the Sylvester Stallone movies of the 1980s and 90s about Marciano’s namesake. Rocky was covered in blood, knocked down a number of times and behind on points before coming back strong and winning by KO in the thirteenth round.

Later, Ali stated that it was all a sham and no computer was involved in the outcome of the heavyweight ‘super fight’. This is probably true as according to Marciano’s brother, Peter, the two had talked about the fight before it was aired and Rocky had predicted the outcome to the letter.

In what has been described as an early mixed martial arts contest, Muhammad Ali once fought a famous Japanese professional wrestler named Antonio Inoki. The 1976 fight was billed as a battle to find the ‘toughest man on earth’ though it was a farce from the very beginning.

The Ali camp believed it would be just an exhibition match but when they saw Inoki training hard just before the fight took place, they realised he was taking it very seriously. They threatened to pull out unless several rule changes were made, including no punching for the bare fisted wrestler and that he can only kick when he was on the ground.

This left Inoki with very few options once the bout began so he spent most of the fight on the canvas trying to kick his opponent. In response, Ali stayed out of range for the most part, taunting his opponent but to no avail. He threw just six punches for the entire fifteen round fight, which ended in a draw and with the enraged crowd throwing trash into the ring and chanting; ‘money back, money back’.

Muhammad Ali Talked a Veteran out of Committing Suicide

In 1981, Ali happened to be near the scene of situation that was worsening by the minute. A Vietnam veteran was on a ninth floor ledge of a building threatening to jump, shouting; "I’m no good, I’m going to jump, the Viet Cong are coming at me!" After police, a psychologist and a minister had all failed to talk the man down, the former champ volunteered to help.

He made his way to a nearby window and told the man; "I’m your brother, I want to help you." Soon, the man allowed Ali to approach and after a tense twenty minutes, the man came off the ledge and was taken for psychiatric evaluation with Ali promising to visit him later that week. 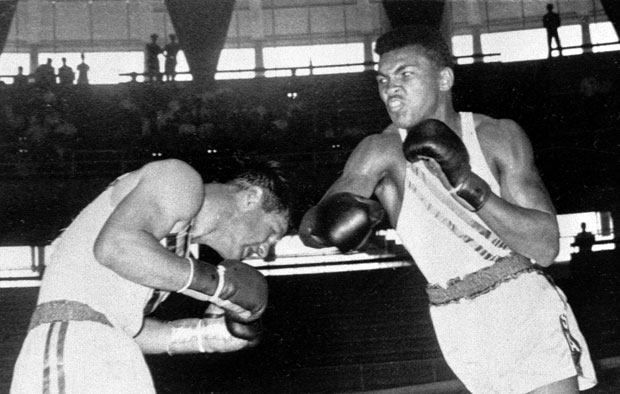 When the Queensbury Rules were introduced to boxing in 1867, the sport began to become more professional and socially acceptable. However for black boxers, rising to the top became more difficult as the sport became institutionally racist.....Read Article

Sam Langford is one of the greatest boxers never to be crowned World Champion. Boxing in the early half of the 20 century, he was a victim of the ‘colour line’ and not given his chance because of the colour of his skin despite the fact that the champion at the time, Jack Johnson, was an African American.....Read Article
Joe Louis
Joe Louis (aka The Brown Bomber) was an American boxer and widely considered to be one of the greatest world heavyweight champions of all time. He reigned from 1937 to 1949 and became an American hero when he defeated the German Max Schmeling and later through his work promoting the war effort. However, later in his career he would face massive debts due to unfair treatment by the taxman.....Read More
The Reign of Don King