Female samurai warriors like Tomoe Gozen were known as Onna-bugeisha. They would train in the fighting arts, however few would actually fight on the battlefield.

Instead, they would use their skills to defend the home and family while the men of the household were absent, especially in times of war.

One of Tomoe’s weapons of choice was the Naginata, which consisted of a wooden shaft with a curved blade on the end and was ideal for stabbing, hooking or to bludgeon an opponent to death.

By the 16th century, the Naginata was a symbolic weapon for female members of the samurai class, though they seldom actually fought.

"Tomoe had long black hair and fair complexion, and her face was very lovely; moreover she was a fearless rider, whom nether the fiercest horse nor the roughest ground could dismay, and so dexterously did she handle sword and bow that she was a match for a thousand warriors, and fit to meet either god or devil.

Many times she had taken the field, armed at all points, and won matchless renown in encounters with the bravest captains, and so in this last fight, when all the others had been slain or fled, among the last seven there rode Tomoe". 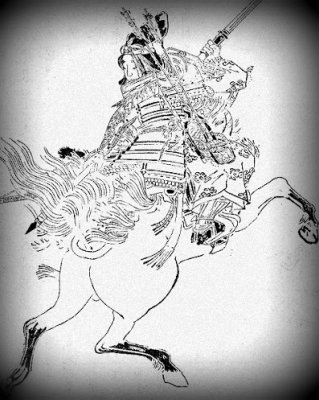 Tomoe Gozen appears in Japanese samurai chronicles from the latter half of the twelfth century and probably lived from around 1157 to around 1247, during the Heian Period. While there is much variation on the stories concerning her, the texts are clear that Tomoe was one of the best martial arts practitioners of her day and was famed as a warrior of formidable skill.

As one of the few female samurai legends, Tomoe has earned her place in martial arts history however how much of the accounts of her are actually true is impossible to tell. It is certainly plausible at least that Tomoe did learn martial arts and had a unique opportunity to use her skills.
She is famed for going into battle alongside the samurai warrior Minamoto Yoshinaka, who she served with absolute loyalty; according to some sources she was also his mistress or even his wife. They fought together in the Gempei War (1180 – 1185), which she is believed to have survived, unlike her master Yoshinaka. In one battle, she is reported to have single handily defended a bridge against dozens of attackers.
In another, she is said to have killed many samurai warriors one after another in single combat and then killed their leader, Uchida Iyeyoshi. Attempting to drag her from her horse, Uchida infuriated Tomoe who promptly decapitated him and delivered his head as a trophy to Yoshinaka. Her most famous story is from the Battle of Awazu (1184) where Yoshinaka was finally defeated by his enemies. When the battle was lost, Yoshinaka told Tomoe he will fight to the death but she should leave the battle field as he would be shamed to die fighting with a woman; after killing another opposing samurai warrior, she complied and escaped.

Tomoe Gozen is unique as she is the only female warrior who is described in detail in the ancient Japanese samurai war tales. The Heike Monogatari does not mention her again after she leaves the Battle of Awazu but according to another source, the Gempei Seisuki, she had been ordered by Yoshinaka to go to his home province and tell the story of his final battle in a bid to make his exploits a become a part of samurai legend.

However as she left the field, she was attacked by an enemy soldier named Wada Yoshimori. He appeared to have lost his samurai sword as he used a pine trunk as a club to attack her. She twisted and broke it but was over powered and forced to become Wada’s concubine. She had a son with him who, it is said, was killed in 1213 when the Hojo family destroyed the Wada family. After this, Tomoe is said to have become a nun and lived to the age of ninety-one.

Other sources end the story of one of the most formidable female warriors in the history of the martial arts differently; some say she killed many enemies before leaving the Battle of Awazu, then retired to a temple and took holy orders. Others have it that after leaving the battlefield she committed seppuku, a form of self-disembowelment a warrior would inflict with his (or her) own samurai sword to avoid the disgrace of capture.

Others still say that she retrieved Yoshinaka’s head from the battle field and walked with it out into the sea, bringing about her own death so as to continue to serve her master in the afterlife. What really happened to Tomoe Gozen both before and after the battle of Awazu will probably never be known for sure but it is probable that she not only existed, but played some part in the Gempei War. This makes her a rarity in the history of fighting, as a woman making a difference in the traditionally male world of martial arts and warrior history. 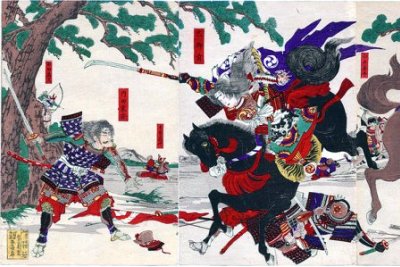 A brief overview of the history of the samurai, looking at the rise and development of the leading social class in Japan and some of the cultural traits than made the samurai warriors unique such as their weapons and their code of ethics, known as bushido.
Read Article
The Heian Period

The Heian Period was a time of major change in Japan as it saw the rise of a new warrior elite, the Samurai. The leaders of this new power would dominate the politics of the country for centuries and would even supplant the power of the Emperor, though not without a struggle.
Read Article
Yoshitsune Minamoto

A look at the change and turmoil experienced by the ruling elite of Japan during the Kamakura Period and the Kemmu Restoration. A series of civil wars and two invasions from the Mongols saw powershifts not only between rival families, but also between the titles of the Emperor, the Shogun and the Regent.
Read Article
The Mongols vs. The Samurai

While the samurai warriors of the late thirteenth century were formidable warriors in their own right, when faced with the onslaught of the Mongol Hordes they seemed to be fated to lose. They were outclassed in every way by however things did not go according to plan for the foreign invaders.
Read Article
The Japanese Samurai Sword

The samurai sword, it is said, was believed to contain the soul of the warrior who owned it. While this is probably an over romanticised view, it is true to say that there was a spiritual connection not only for the wielder of the katana, but also for the sword smith and his creation.
Read Article
The Muromachi Period
The Muromachi Period was a time of turmoil in Japan that can be spilt into two separate eras. At the beginning of the period, the government was divided into two separate entities sparking the Northern and Southern Courts Era. Then, after a brief period of relative stability, the Warring States Era began.
Read Article
Tsukahara Bokuden

Tsukahara Bokuden was a samurai warrior who lived in the 16th century. In his early days he exemplified what a samurai should be and was known as one of the fiercest warriors around. However in later life, Bokuden would take on a more pacifist philosophical stand point.
Read Article
The Death of a Samurai

The manner in which a samurai died was very important and if possible, it would be during combat in a way that would be told in samurai stories for years to come. Failing that, he should die in some other service to his lord or if his honour depended on it, in a ritualistic suicide known as seppuku.
Read Article

The Duels of Miyamoto Musashi
Miyamoto Musashi is one of the most acclaimed samurai that ever lived. While undertaking a warrior’s pilgrimage, he fought in over 60 duels dispatching the best swordsmen in a given area, often in fights to the death.
Read Article
The Samurai at War